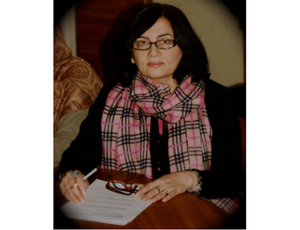 In the wake of ongoing Women's Marches in Pakistan since 2018-- popularly known as Aurat March in the indigenous Pakistani languages-- in this talk I look at the essentialist framings of secular/Islamic feminisms as reductive. The use of essentialist and binary framings such as secu-lar/Western/feminist and religious/traditional/Islamic by the politicians, community and religious leaders-- who use religious/secular binarism as a tool to control the struggle for gender equality -- leads to attacks on women’s human rights including women’s reproductive rights , protection against domestic violence, harrassment and rape propagating the notion that human and gender rights are derived from Western influences , hence deemed anti-Islamic. A brief historical overview of the official state discourses on women in the Islamic Republic such as Chaddar and Char Di-wari ( veil and four walls) is followed by a discussion of Aurat March visuals and slogans by women who have reclaimed and reappropriated such discourses and narratives in recent years lead-ing to polarization among different stakeholders as well as to intense contestations around the lan-guage of women’s rights.